The northern-most region of KwaZulu-Natal, Maputaland, is one of the most unspoilt areas of the province, and a region where the wonders of the African bush can be experienced first-hand.

Situated in northern KwaZulu-Natal, South Africa, the coastal village of St Lucia is the gateway to the Greater St Lucia Wetland Park, incorporating Mkuzi (a Big 5 reserve), Sodwana Bay (a world famous scuba diving destination) and Kosi Bay (a natural paradise). In close proximity to St Lucia is the Hluhluwe-Umfolozi Game Reserve, home to the Big 5 and the largest population of rhino in the world. The Greater St Lucia Wetland Park is a registered member of the Ramsar Convention and is a candidate for World Heritage Site status. Known as the jewel of KwaZulu-Natal, with five distinct ecosystems and a unique biodiversity found nowhere else on earth, it is not hard to see why the earliest name for St Lucia, given by Portuguese explorers, was “River of the Sands of Gold”.

To go hand in hand with St Lucia’s 300 sun-filled days a year the area boasts magnificent self-guided walking trails through sub-tropical forests, grasslands and lily-covered pans which abound in animal life. Lake St Lucia, the largest estuarine water body in Africa, can be explored by means of a boat safari, bringing the visitors into close proximity with hippo lazing in the waters and crocodiles basking in the sun on the estuary’s banks. Pelicans riding the thermals overhead and sights of Goliath Herons stabbing at fish in the lake make this a true African Experience.

Along the natural and unspoilt coastline, golden beaches stretch as far as the eye can see, lapped by warm blue waters from the Indian Ocean and bounded by the world’s highest vegetated sand dunes. Whales and schools of dolphins frequent this spectacular coastline, also the natural breeding habitat for the leatherback and loggerhead turtles. These waters are renowned for big game fishing and the much sought after marlin are landed here. The warm Mozambique current attracts a kaleidoscope of colorful tropical fish that feed off coral reefs.

The park stretches along the coast for over 80 kilometers from the Mfolozi swamps and Mapelane in the south to Sodwana Bay in the north.The Greater St Lucia Wetland Park was declared a World Heritage Site in 1999, and for good reason. It’s starkly beautiful and an important ecosystem. World Heritage Sites are places that have a profound cultural or natural importance.

In Africa, these sites include Robben Island in Cape Town, the Great Zimbabwe Ruins and the Ngorongoro Crater Conservancy in Tanzania. Spanning an area of over 250,000 hectares, the park contains five distinct ecosystems including freshwater lakes, marine reserves, wooded areas and the world’s highest forested dunes. The lake is predominantly croc and hippo territory, and the park has over 800 hippopotami and 1,200 Nile crocodiles in its numerous waterways.the abundant fish life attracts masses of estuarine birds and there are numerous other game species in the parks that compose the Greater St Lucia Wetlands.The area was plundered by early hunters and explorers until it was declared a wildlife sanctuary in 1897. Today, the park is a beacon to South African conservation efforts. Critically endangered marine turtles and birds have been given a chance thanks to laws prohibiting driving on beaches since early 2002.

Lake St Lucia is probably the most easily accessed feature of the park. It flows out into the Indian Ocean at the estuary on the southern end and has numerous swamps and marshes on its borders.The lake covers an area of nearly 360 square kilometers and its dazzling expanse is dotted with islands. The lake’s depth and salinity vary depending on the seasons and the rainfall. The marshes and filtering sand dunes give asylum to freshwater species when the lake salinity is high. 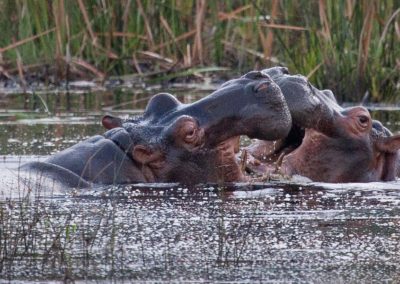 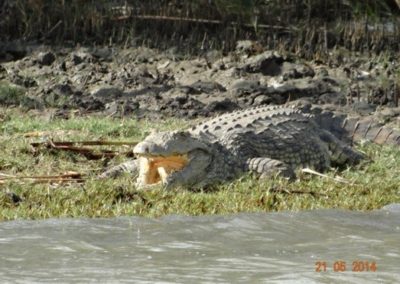 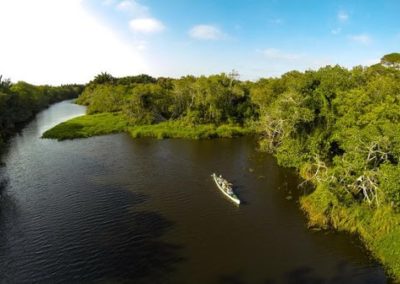 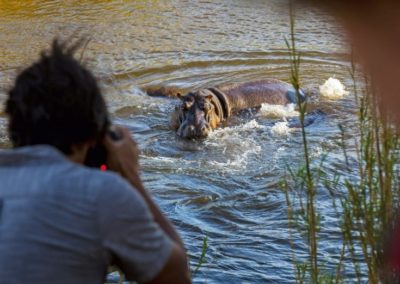 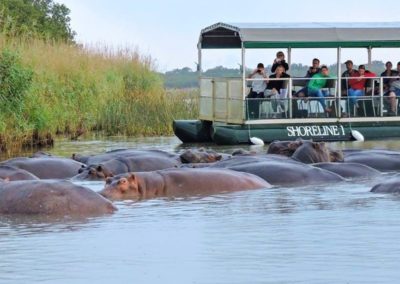