Leopard, African Elephant, Buffalo & Hippo are some of the highlights. The park offers the visitor an opportunity to see a variety of animal life associated with a Wetland eco-system as opposed to the bush and grasslands normally found in big 5 game reserves.

The largest leatherback on record (a male) stranded on the coast of Wales in 1988 and weighed almost 2020 lbs (916 kg).Witness this miracle of nature where the Leatherback & Loggerhead Turtles return to lay their eggs on the very same beach they were born. The tour includes a night drive in St. Lucia Wetlands Park & is tide dependant. From November through to mid-January and thereafter the hatchlings returning to the ocean can be seen for a month or so afterwards.

Leatherback Turtles are the largest living marine reptiles and live almost their entire lives at sea. The only time that they are on land is when the female turtles lay eggs, and when hatchlings emerge from the nest and make their way to ocean. Leatherback Turtles are one of the most migratory of all marine turtle species, making trans-Atlantic and trans-Pacific crossings. They are easily distinguished by their carapace, which is leathery (not hard as in other turtles) and by their long front flippers. The Leatherback turtle has a unique system of blood supply to bones and cartilage. This enables their body temperature to stay several degrees above the water temperature and allows them to tolerate cold water. They can dive to depths of up to 1,200m much deeper than any other marine turtle.

Name: Dermochelys coriacea
Status: Listed as Critically Endangered (facing an extremely high risk of extinction in the wild in the immediate future) by the International Union for Conservation of Nature and Natural Resources. In South Africa, Leatherback Turtles are fully protected under the KwaZulu Natal Nature Conservation Management Act No9 of 1997.
Diet Description: Jellyfish
Habitat: Primarily found in the open ocean, as far north as Alaska and as far south as the southern tip of Africa.
Size: The leatherback can reach up to 180 cm, and 500 kg in weight.
Distribution: Most widely distributed of all sea turtles. Found world wide with the largest north and south range of all the sea turtle species. Leatherback Turtles are present throughout the Indian Ocean and are not uncommon in the pelagic zone around South Africa. They tend to stay away from the near shore zone and are capable of tolerating extremely cold water during feeding movements. Leatherback Turtles are known to frequent the cold southern ocean as far as 600 km south of Cape Agulhas and are often recorded in the Benguela Current area of the West Coast. Reproduction: Females come ashore in bands and lay their 60 to 100 eggs in holes that have been dug in the sand. Seven weeks later, when the eggs hatch, the babies rush back to the water. 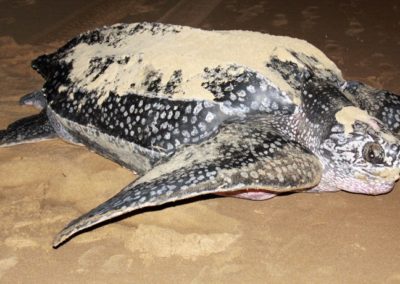 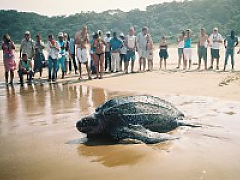 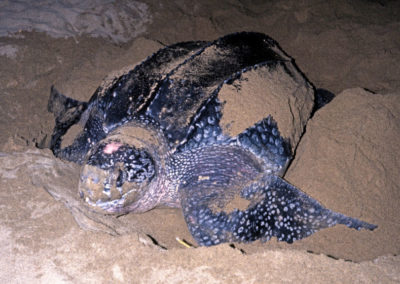 Rates include: Registered guide, transport in an air-conditioned vehicle, entrance fees and dinner

Rates exclude: Drinks/beverages, gratuities and any items of personal expense